Sell Your Own Damn Movie!

Sell Your Own Damn Movie!

This is the 3rd volume in Mr. Kaufman's hilarious, how-to series for hard-working self-starters and hard-laughing, cheeky filmmakers. "Sell Your Own Damn Movie!" covers everything you need to do to get your finished film seen by festival-goers, movie-goers, DVD-buyers and web-goers around the world. You will be lead through a primer on the history of film distribution to a discussion of the many ways you can get your film out there, either through a reputable distributor or all on your own. From the realities of distribution, to utilizing the internet to self-distribution, Mr. Kaufman tells you in his habitually lucid and off-the-wall way. Inserts include interviews and pointers from veteran distribution pros as well as directors and producers who share their own front-line stories. Mr. Kaufman recounts his own raucous stories of marketing pleasures and nightmares from 35 years of movie-making experience, creating a uniquely useful and entertaining read. Or, in Lloyd's inimitable words. The most asked question at my worldwide popular, legendary, renowned master class is, "How do I get my no-budget, zombie giraffe flick distributed?â€ Well, have no fear, because the 3rd volume in Uncle Lloydie's how-to series of go-to guides for filmmakers reveals the secrets, methods and tricks (short of prostituting yourself and selling bodily organs) to getting your film distributed. With Troma, our legendary 35-year-old independent studio, Michael Herz and I have developed a low cost, high-impact method for low-budget film distribution, which has lead to a high-profile brand name and a catalog of over 800 titles! Now you can learn to get you movie out there, too. I will be your busty tour guide, sharing with you my hard-earned cinematic distribution know-how! -LEARN! How I achieved box office success with my fowl chicken zombie masterpiece Poultrygeist, and everyone's favorite super-human hero from New Jersey, the Toxic Avenger, for practically no money! -SMELL! The sewer that is mainstream distribution as I drag you through the muck, be-farting upon you the real scoop behind "indieâ€ and mainstream distribution deals. -MASTICATE! (No, not that kind of masticating) On the knowledge of DVD distribution as I es-chew the fat and get to the skinny of Do-It-Yourself DVD distribution. I will teach you the fundamentals of having a good website (like www.Troma.com) to boost your sales! -FEAST! On my golden brown chicken puns as I cleverly cluck your brain out with the irrefutable knowledge of how I sold over 10,000 units of the 3-disc limited-edition Poultrygeist DVD in a matter of months! YES! If you have any doubt that I will not be able turn your no-budget zombie giraffe opus into box-office gold, then put down this book proposal! No wait, pick it back up, pick it back up! This is a recession damnit, Troma needs all the money we can, er... I need to educate you filmmakers looking for distribution gold (brown)! After reading my book, any damn filmmaker will be able to "Sell Your Own Damn Movie!â€ Featuring expert advice from those who have successfully sold their films: * David Cronenberg (Director of The Fly, Crash, A History of Violence) * Oren Peli (Director/Producer of Paranormal Activity) * Ted Hope (Producer of Crouching Tiger, Hidden Dragon, In the Bedroom, Happiness) * Brad Kembel (Executive Vice President of International Distribution at Summit Films; Twilight) * James Gunn (Writer/Director of Super, Dawn of the Dead, Slither) * Jonathan Wolf (Executive Vice President, Independent Film and Television Alliance and Managing Director, American Film Market) ... and many more who have sold their own damn movies! 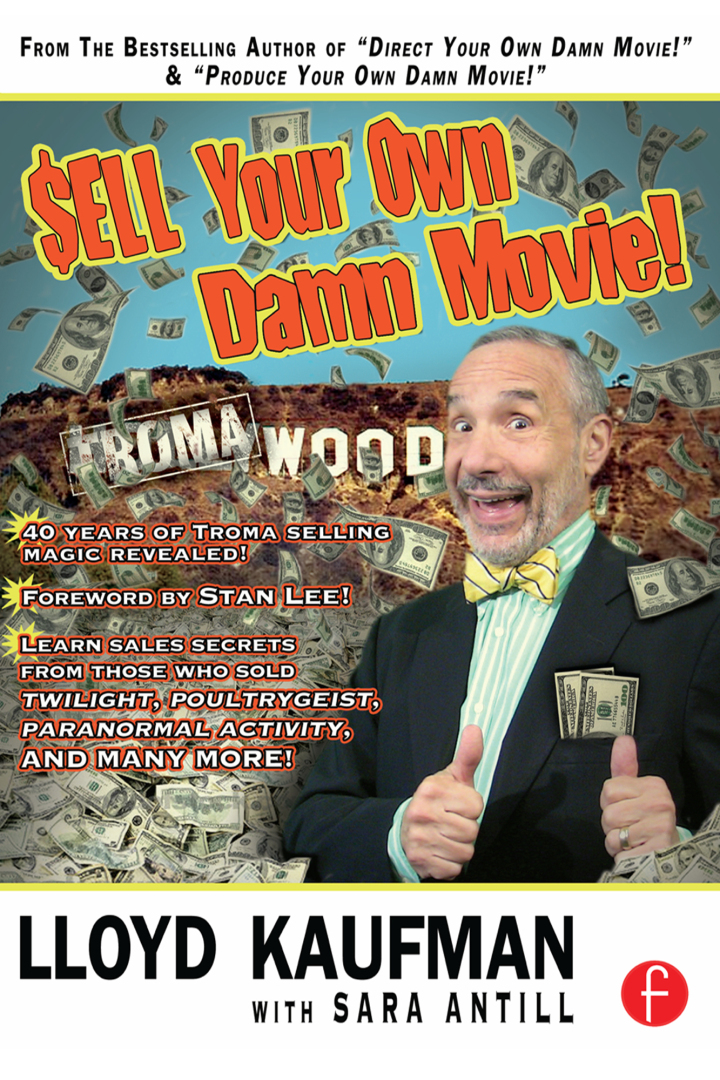