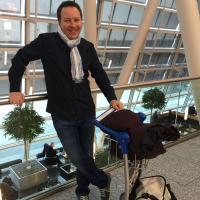 ABC Foods Limited is a grocery store company specializing in high-quality, fresh produce, and gourmet and organic foods. Currently, there are three locations in downtown Vancouver.

All of the stores have similar formats and layouts. Each store is approximately 20,000 square feet with departments for fresh produce, meat and poultry, and baked goods. All of the inventory items are sourced locally, where possible. Anthony and Brenda pride themselves on having developed stores where customers really enjoy the shopping experience. Customers are encouraged to browse and there are always sampling stations set up for customers to taste the new and featured products. The stores are known for their friendly and knowledgeable staff.

ABC has recently decided to expand to the suburbs, and plans to open one new store in 2014 and another in 2015. The new stores will be similar in format and size to the current locations. For the past year, Brenda has been looking at a variety of locations, and has finally decided on the two. In the meantime, Anthony has been busy trying to forecast initial costs and projected sales including the two new locations.

You are a CPA and work as a consultant for Henderson and Mulik, a regional financial consulting firm in Vancouver. Anthony recently contacted David Henderson, a partner at Henderson and Mulik, for some assistance with preparing forecasts and providing financing advice for these expansion plans.

It is now January 2014. David would like you to attend the meeting with this new client to discuss the engagement.


David: Thank you, Anthony and Brenda for inviting us over to discuss your expansion plans.

Anthony: Your firm has come highly recommended by a business associate of mine. He said that you have been very helpful in providing strategic financial advice. Brenda and I have decided to expand outside of the downtown core and are looking to open two new locations, the first in July 2014 and the next to follow in June 2015. I have brought along our most recent financial statements for our company (see Exhibit A). We have a December 31 year end. Brenda and I have also worked up some numbers for expected sales, costs and initial start-up costs for the next three years (see Exhibit B).

Brenda: Our real problem is how to finance this. This is a very large and costly expansion for us, but we are not getting any younger and really want to open these stores as soon as possible. In the past, we had saved up money and tried to finance at least half of the expansion costs with internal funds. This time is different and we have decided to seek most of the financing from outside sources.

Anthony: In total we expect to need about $13.4 million to finance leasehold improvements and new equipment purchases. We think that we can finance the inventory and store opening costs with our current line of credit and cash flow from operations.

Brenda: Yes. I have been able to get proposals from three different sources that we’d
be amenable to. The first is from King Bank, with whom we have an existing relationship. Our relationship manager has indicated that the bank is willing to provide mortgage funding for the new locations at a very attractive loan to value basis, though admittedly the interest rate is higher because of this.

Anthony: The next source is a friend of ours who is really interested in becoming
involved in the business. He has been shopping with us for years, and always asks me if I am ever looking for another partner, to let him know. So I did. He sold his company five years ago and is now looking for something else to do. He suggested that he could invest in the company with preferred shares. I am not sure how this would work, but he suggested retractable, redeemable shares. This sounds very interesting to us since the amount would increase our equity and show less debt on our balance sheet. Perhaps you can explain to us how this would work?

David: Of course. We are very familiar with this type of financing and it is used a lot in private companies. Once we have a look at the terms and conditions
proposed for these shares, we can outline the implications on the income statement and balance sheet.

Brenda: Our last source is a leasing option that our new landlord suggested to us. Both of our new locations are owned by the same landlord. He said that he will pay for all of the leasehold improvements and we can lease these assets from him. I have summarized all of the terms and conditions for these financing proposals for you (see Exhibit C).

David: It looks like you are really prepared. What would you like us to include in our report?

Anthony: We need a three-year projection, including both the income statement and balance sheet, under each of the financing proposals. We are really concerned about our take-home pay. We have been doing tax planning for years, and have always taken a bonus out of the company in order to pay the lowest rate of tax in the corporation. We like to keep the company’s income before taxes around $500,000 to maximize the small business deduction. Brenda and I and our large family live off the annual bonuses, so this is important for us to continue and grow.

Brenda: We also have a line of credit we use to finance working capital. The line of credit allows a maximum limit of up to 50% of the inventory and requires that the current ratio be at least 0.6:1. Finally, we have an existing mortgage with
King Bank that requires us to pay principal of $450,000 annually on
December 31, which is secured by real estate of the existing three locations.

David: I think we have everything we need for now. We will also provide some discussion on each alternative and give you a final recommendation.

Anthony: Thank you. We look forward to your report.

You return to your office to review the information and start the report for the ABC.

Analysis of the three financing options for funding the expansion of ABC Foods Limited shows that the lease arrangement proposed by your landlord is the best alternative for the company. The leasehold improvements that the landlord will undertake mean that the company will not need to secure a significant amount of cash in order to set up the two additional stores. This will enable the company to maintain its current capital structure, thus enabling you to access funding from financial institutions in future should you need it to fund other projects. The following is a detailed analysis of the proposed financing options, followed by a conclusion and recommendation.
Option 1: Buy equipment using funds from a new mortgage from King Bank
Accepting the new mortgage from King Bank under the proposed conditions will mean that the company will not be able to meet these conditions without securing additional funding. Firstly, this funding option will result in additional...