Hybridization and general principles of bonding are complicated, but not inexplicable. A good understanding of hybridization is necessary as it is central to drawing and imagining molecules with the correct geometry. A firm grasp as one progresses makes it easier. It’s essential to understand what an alkene or alkyne are actually composed of.

Carbon and the other second elements can have no more than three geometries: sp3, sp2 and sp. Note that it’s not “s-p-one”. Chemists like to omit the number one when it is obviously how many there are. Tetrahedral, trigonal planar, and linear. It is critical to making all your drawings as precise as possible.

Biological life is complex but the atoms it comes from are far simpler.

Starting with hydrogen, one can increase the proton count or atomic number (Z) of an element by adding one proton at a time, starting from hydrogen. That proton or positively charged particle would be accompanied by an electron to balance the charge. Both increase in number in single increments.

Carbon with six protons has six electrons in the ground state (in blue) above and does not appear like it has 4 unpaired electrons to make 4 bonds. That’s the centrality of carbon, it forms four bonds that can create the right kinds of structures, mainly asymmetrical ones, and while many atoms can make 4 bonds, only carbon makes sufficiently long-lived ones.

For the bonding model of interest, we have to use an approximation (there are two) in the familiar theory.  We say we are promoting an electron from the 2s to the 2p energy level. That gives one s and three p orbitals, singly filled. After mixing or a type of homogenization of the 1s and 3p electrons they become 4 equal and equivalent unpaired and hybridized electrons as shown below.

These electrons then mix together with other atoms with these 4 equivalent (they are quantized or come in the same discrete packet of energy) mixed electrons, and the bonds are all of equal length and of uniform distance from one another. By analogy, if chocolate cake were an “s electron” and vanilla cake were “p electrons”, they are mixed together to the point that one would get a cake that’s 75% vanilla no matter where you slice it, since s + p + p + p = sp3. Each electron has ¼ or 25% “s” character. Some chemists speak only of s-character and others of p-character, but it doesn’t make a difference until there are discussions of acidity. 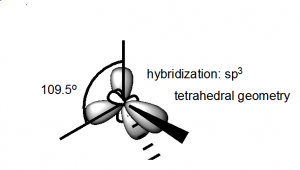 This means a mixing or combination process is necessary. Following the above analogy, if you get 4 slices of marble cake (electrons hybridized and bearing both s and p character) from 1 slice of s and 3 slices of p, you would make the angles 109.5o (an important number to remember). The important thing to realize is that the number of electrons that end up getting mixed or hybridized determine the geometry of all the spn orbitals. Not all four do.

Carbon can form bonds and double bonds, and triple bonds are based on this mixing. It is not a reaction: whether they do this or not in reality is not in question, as this is a theory that simplifies the complexity of covalent bonding that works and is useful for communicating. All 4 of the sp3 orbitals point away from the carbon at 109.5o.

The VSEPR guidelines from General Chemistry tell us that attachments to an atom are made with the greatest angle between them. This is how we obtain these geometries.  The oxygen in water is essentially tetrahedral. Since it is only singly-bonded, it must be sp3 and have angles that approximate 109.5. It does but since oxygen has two lone pairs of electrons that are diffuse (larger). These larger orbitals occupy greater volumes than covalent bonds to hydrogen. When only the geometry of bonds is considered, it is called bent. Organic chemists care about all attachments, particularly lone pairs of electrons. 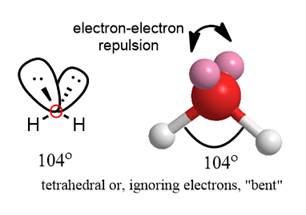 For three attachments like in doubly bonded carbons, the most stable is trigonal planar geometry. Not all the electrons are mixed. Only three combined and hybridized.

All the Csp2-H1s bonds are co-planar. Since both carbon atoms have the same hybridization, the other side has the same, so as the two adjacent sp2 carbons each have a p orbital containing an electron.

The overlap of orbitals containing electrons is known as a bond. These unhybridized electrons in p orbitals and the single electron contained in both atoms constitutes what is called a pi-bond or "double" bond. This overlap of orbitals is not maximal and is thus weaker. The inter-nuclear distance is the same but the node prevents maximal orbital overlap. The pi bond is weaker than a single bond, making it a reactive center in a molecule. This is important and worth continually reinforcing.

All the other bonds are the traditional single or "sigma" bonds like in H2. In covalent bonding therefore, there are only sigma and pi bonds that matter. There are also bonds between higher energy d orbitals in heavier elements: This occurs in the heavier and more metallic elements that can expand beyond an octet like the transition metals but is beyond the scope of this article.

When atoms are linear they have sp hybridization.

And last but not least are sp atoms. As you might have already guessed, in ethyne (or acetylene) the simplest alkyne, hybridization follows the trend from sp3 to sp2 to just “sp”.

Thus, only two electrons will hybridize in an sp carbon, so ethyne can only form two attachments or bonds (a lone pair counts as an attachment—look at its geometry). The remaining elections are in two unhybridized p orbitals that overlap to form not just one, but two overlapping p orbitals which must be on sp2 carbon or another atom (almost always, N, O, and S), with π-bonds perpendicular to each other. In organic chemistry we say they are orthogonal (little to zero overlap). One sigma plus two pi bonds therefore equals a triple bond.

Since a triple bond is linear, the unhybridized p orbitals are perpendicular to each other. The more s-character you have, the more spherical you are.  The spherical orientation of an orbital means that if an electron has more electron density around it (i.e. has more s-character). That means it is s + p = 1.0. The triple bonded carbon has 50% s character.  So, why does this matter?

Acidity. The more electronegative you are, the more likely you are to give up (donate) a proton. It has to do with stability once a proton is lost, as you are left with a base. If you donate a proton you are, by definition, an acid. (A Bronsted acid), and the base formed is weak.

Recall that there is a characteristic that varies by element known as electronegativity.  This is the capacity to hold electrons as close to the nucleus as possible, and it is part of chemical intuition. But it doesn’t “hold” them really, but instead it works in a way that is, both statistically and mechanically, a probability function (χ2).

The point is that the closer you are in character to a sphere (an s orbital), the more electronegative you are since you are as close as possible to the nucleus. P character has no statistical probably of finding an electron (remember, they are quantized) to close the nucleus and in this way negates or subtracts s-character. (s + p = 50% s 50% p = 1.0). An sp hybridized atom is more electronegative and is correspondingly more acidic than an sp2 orbital (33% s-character) or an sp3 orbital (25% s-character).

One final note on drawing. Remember to draw structures with the correct geometry. If asked to draw everything like the overview above, even something small would take up the entire page. We draw in abbreviations of the shorthand just mentioned.

One must strive to maintain the bond angles and geometry in drawing just like the structures corresponding to the hybridization state. It’s important not to lose points over simple things.