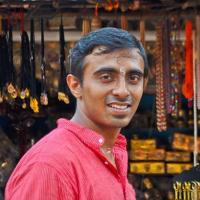 The system considered in this project consists of a primed steel door attached to the wall by the means of three spring-loaded hinges, and a door-stop that is used to statically stop the door. The door-stop should be designed such that it is able to resist the torque provided by the hinges and prevent the door from closing. The floor and the stopper should be designed such that they are able to provide sufficient frictional force.

The aim of the project is to study the effect of floor surface roughness while considering friction, as well as find the amount of internal forces inserted on the top hinge shafts

1. Hinge model, FHD-A1-1-104, is used
2. While doing force calculations, vertical force is assumed to be shared equally by all three hinges
3. Since considering three hinges would make the system statically indeterminate, the horizontal reaction force at the hinge at the bottom is assumed to be zero.

We know, from the catalogue, that the maximum torque that can be provided by this hinge is 5 Nm. Therefore, the total torque caused by three hinges combined: T = 5 x 3 = 15 Nm