a. Do the data indicate a significant difference in attitude for males and females? Use a two-tailed test with α = .05.
b. Compute r(square), the amount of variance accounted for by the gender difference, to measure effect size.
c. Write a sentence demonstrating how the results of the hypothesis test and the measure of effect size would appear in a research report.

a. Are the neurological test scores significantly lower for the soccer players than the swimmers in the control group? Use a one-tailed test with and α = .05.

b. Compute the value of r (sqr) (percentage of variance accounted for) for these data.

3. Participants enter a research study with unique characteristics that produce different scores from one person to another. For an independent-measure study, these individual differences can cause problems. Briefly explain how these problems are eliminated or reduced with a repeated-measures study.

4. a. A repeated-measures study with a sample of n = 25 participants produces a mean difference of MD = 3 with a standard deviation of s = 4. Based on the mean and standard deviation, you should be able to visualize (or sketch) the sample distribution. Use a two-tailed hypothesis test with α = .05 to determine whether it is likely that this sample came from a population with μD = 0.

b. Now assume that the sample standard deviation is s = 12, and once again visualize the sample distribution. Use a two-tailed hypothesis test with α = .05 to determine whether it is likely that this sample came form a population with μD = 0.

Explain how the size of the sample stand deviation influences the likelihood of finding a significant mean difference.

5. Research has shown that losing even one night’s sleep can have a significant effect on performance of complex tasks such as problem solving (Linde & Bergstroem, 1992). To demonstrate this phenomenon, a sample of n = 25 college students was given a problem-solving task at noon on one day and again at noon on the following day. The students were not permitted any sleep between the two tests. For each student, the difference between the first and second score was recorded. For this sample, the students averaged MD = 4.7 points better on the first test with a variance of s2 = 64 for the difference scores.

a. Do the data indicate a significant change in problem-solving ability? Use a two-tailed test with α = .05.
b. Compute an estimated Cohen’s d to measure the size of the effect.

6. A researcher for a cereal company wanted to demonstrate the health benefits of eating oatmeal. A sample of 9 volunteers was obtained and each participant ate a fixed diet without any oatmeal for 30 days. At the end of the 30 day period, cholesterol was measured for each individual. Then the participants began a second 30 day period in which they repeated exactly the same diet except that they added 2 cups of oatmeal each day. After the second 30 day period, cholesterol levels were measured again and the researcher recorded the difference between the two scores for each participant. For this sample, cholesterol scores averaged MD = 16 points lower with the oatmeal diet with SS = 538 for the difference scores.

a. Are the data sufficient to indicate a significant change in cholesterol level? Use two- tailed with α = .01
b. Compute r2, the percentage of variance accounted for by the treatment, to measure the size of the treatment effect.
c. Write a sentence describing the outcome of the hypothesis test and the measure of effect size as it would appear in a research report.

7. A research uses a matched-subjects design to investigate whether single people who own pets are generally happier than singles without pets. A mood inventory questionnaire is administered to a group of 20 – to 29-years old non-pet owners a similar age group of pet owners. The pet owners are matched one to one with the non-pet owners for income, number of close friendships, and general health. The data are as follows:

8. The preview section of this chapter presented a repeated-measures research study demonstrating that swearing can help reduce pain (Stephens, Atkins, and Kingston, 2009). In the study, each participant was asked to plunge a hand into icy water and keep it there as long as the pain would allow. In one condition, the participants repeated their favorite curse words while their hands were in the water. In the other condition, the participants repeated a neutral word. Data similar to the results obtained in the study are shown in the following table:

a. Do these data indicate a significant difference in pain tolerance between the two conditions? Use a two-tailed test with α = .05.
b. Compute r^2, the percentage of variance accounted for, to measure the size of the treatment effect.
c. Write a sentence demonstrating how the results of the hypothesis test and the measure of effect size would appear in a research report. 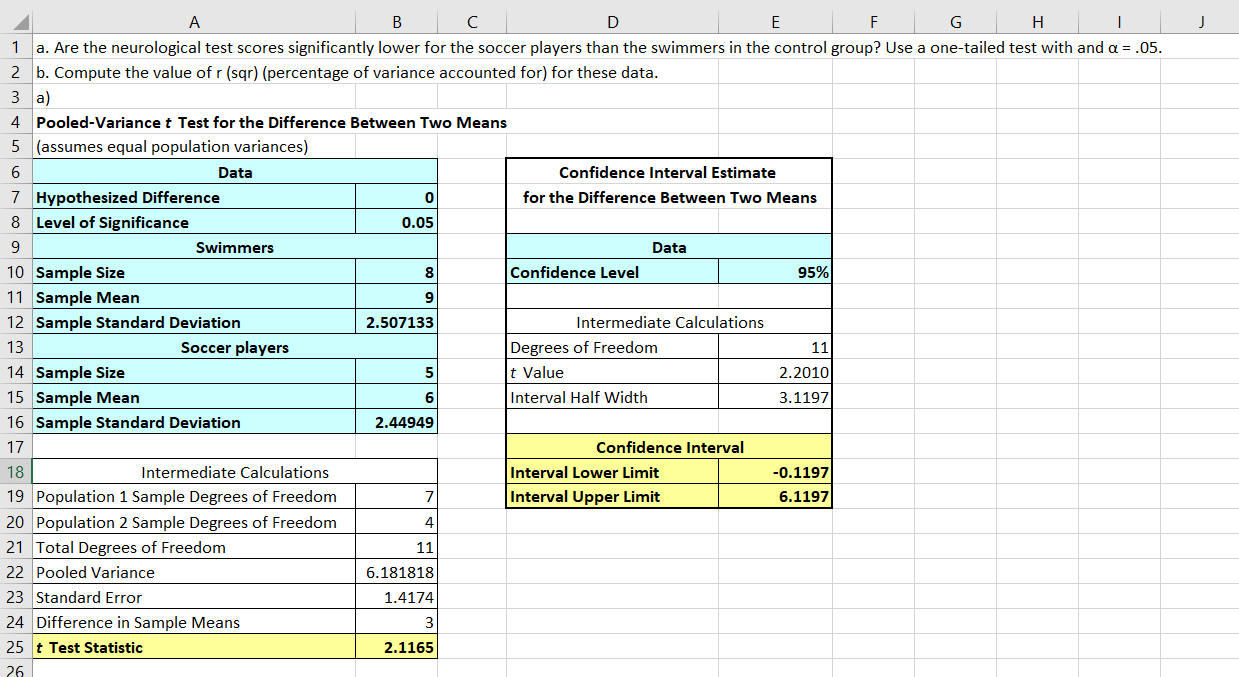