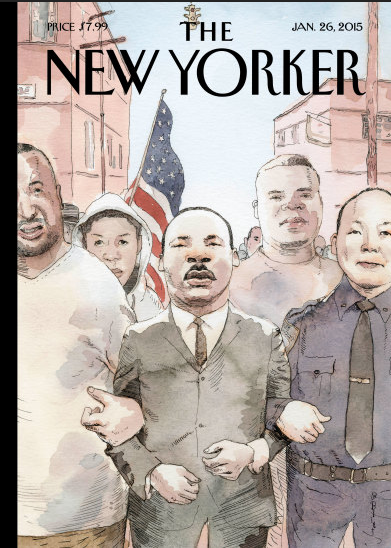 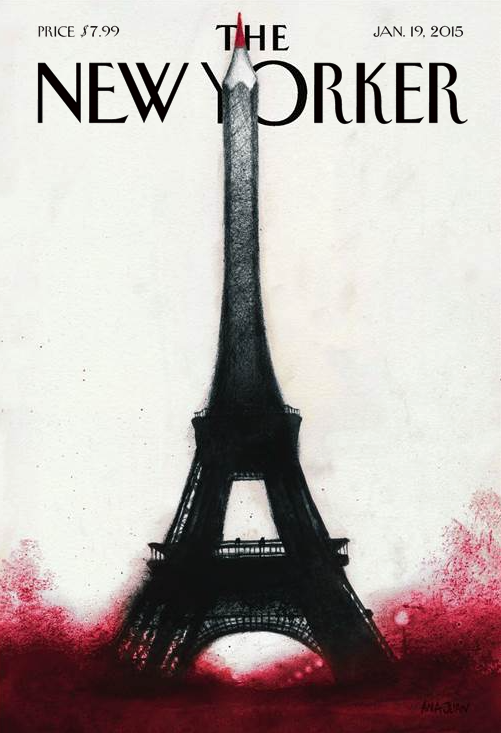 The New Yorker’s January 19, 2015 cover depicts the Eiffel Tower with the top 2/3 of the tower being shaped into a pencil that has a blood red tip. The background progresses into a stark white which stands in bold contrast to the spray of blood red ricocheting off the ground and up around the sides of the tower. Vaguely visible on the right side of the tower through the blood red spray are the old fashioned lamps that light the street below.

The Eiffel Tower represents the location of the attacks by Islamic Extremists on Jan. 7, 2015 at a satirical magazine, Charlie Hebdo, which had run irreverent cartoons mocking Islam. The pencil represents the power of the pen which was the cause of the attacks where 12 people were killed by Islamic militants, including the editor, two police officers, and four cartoonists. The blood red spray below represents the blood of all those who were killed. The lamps that persist despite the blood, demonstrate that this attack will not squelch the individual spirit to shine through the bloodshed and persevere. The sky transitioning into stark white above the blood red spray is equivalent to the traditional colors of black and white to represent good and evil. In this case, the black being replaced by the blood red color below. The message is that good will prevails against evil, despite the terrorist attacks. The blood red tip of the pencil demonstrates that the bloodshed in this attack will only strengthen the will of writers and not squelch freedom of speech as intended....

War Photography and its Effects on Societies at War (2400 words)