All major intstitutions that serve the public, such as schools and hospitals, require an administrative staff to run them, so that they can focus on serving the community. Libraries are no exception, and library administators require highly specialized university training. 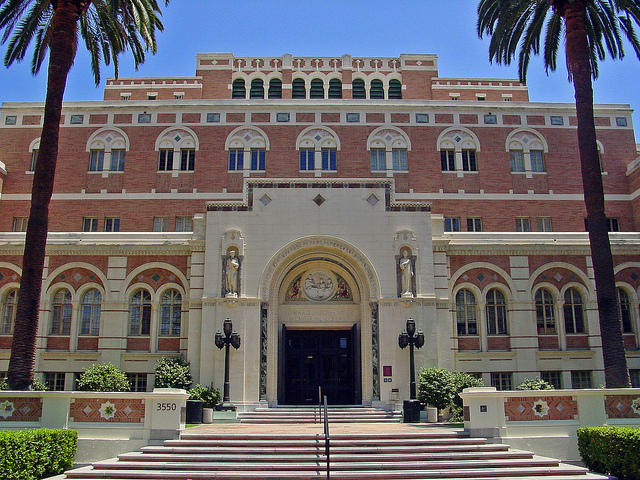 (Doheny Library at University of Southern California. Photo by Kansas Sebastian via Flickr.com)

Libraries are collections of informational materials in many forms, and are available to the public for borrowing. Early libraries consisted mainly of written archives, but today a library can contain collections of reference materials in printed, digital and recorded form. Managing the collections, acquisitions and staffing, is typically done by a library administrative staff, specially trained for this purpose.

The American Library Association (ALA) is one of the organizations that provides leadership and information to library administrators and students of library administration. According to the ALA website, the main function of the ALA is “to provide leadership for the development, promotion and improvement of library and information services and the profession of librarianship in order to enhance learning and ensure access to information for all.” Outside of the United States, the International Federation of Library Associations and Institutions serves a similar function on a global level.

The study of Library Administraion requires demanding coursework and research. Fortunately, our tutors at 24houranswers.com are prepared to help guide you with any research task or assignment.

A Guide to Library Classification Systems

Library classification systems are used in libraries around the world to classify their books and other materials by subject. They help libraries to place their materials in the proper subject categories by call numbers, call letters, or by identifiers that are a combination of numbers and letters. This enables library users to locate materials more easily, and libraries to keep track of what is in their catalogs.

Many different types of library classification systems are used in libraries throughout the world, but five of them are the most well known. They are:

In spite of their differences, the classification systems listed share at least one characteristic: they classify and organize library materials, thus making it easier for library users to locate materials classified under their systems, and enabling libraries to know what materials they have and do not have, how they are classified, where they can be found in the library, and how to locate and/or replace lost items. Without a classification system, libraries would have a hard time keeping track of their materials, replacing them if they are lost, and knowing what subjects, etc. by which they can be identified.  Library users would have a harder time locating and retrieving materials they want. Having a classification system to classify library materials makes easier the lives of librarians and library users, and makes libraries run more smoothly in their day-to-day operations. Finally, it helps catalogers when cataloging new materials introduced into the collection by informing them where to place a book in the library catalog.

Cataloging adds records of library materials to the library's catalog, while metadata describes and categorizes information. Both fall under the provenance of Technical Services in a library. The former has been in use for a long time, while the latter is a child of the Information Age. Both cataloging and metadata help libraries to keep track of their collections, aid users in finding items more quickly, and label the subjects that their resources cover.

The process of cataloging varies by the type of item cataloged. If a cataloger is cataloging a book, he or she will record the author, title, publisher, and other information necessary to help users to find it in the catalog. The same principle − making it easier for user to find materials − operates for other formats, ranging from CDs to digital materials. Catalogers follow specific rules when cataloging. The Anglo-American Cataloguing Rules, 2nd Edition (AACR2) is the main rule set catalogers have followed since the 1970s and 1980s. It is being replaced by Resource Description and Access (RDA), which, among its other qualities, makes it easier to catalog digital materials.

Cataloging adds new items to a library catalog. Metadata is slightly different, although it also keeps track of materials. It labels and identifies books and other items by subject, author, and other categories used in cataloging.  It is, however, more informal and can be created and used by anyone, whether it is to organize an MP3 collection or to denote who authored a book you are reading. The general public's use of metadata is sometimes known as 'creating folksonomies'. When you use metadata, you describe materials using it, and categorize and label them. This is to aid with maintaining library, museum, and archive collections, as cataloging is used to describe physical materials for the same.

If you are learning metadata, there are a number of helpful resources available. Many metadata schema exist that help organize metadata, and govern its production by various sets of rules. The most well-known of the schema is Dublin Core, which is a basic schema, and from which many other metadata schema have been made. Other schema include MODS (Metadata Object Description Schema), MADS (Metadata Authority Description Schema), and EAD (Encoded Archival Description).

You may also want to check out the book Introduction to Metadata, edited by Murtha Baca, contributors Anne J. Gilliland, Tony Gill, Mary S. Woodley, and Maureen Whalen, and published by Getty Publications. It is the definitive introductory guide to metadata. Every library school student, librarian, and information professional working with metadata should read this. It is available through the Getty Publications Virtual .