How to Draw Organic Molecules

How to Draw Organic Molecules

The chemical structure is the language of organic chemistry, and it visually depicts the essential components of an organic molecule. Learning to read and write these structures is foundational to your success in the classroom, but drawing them can be complex and take up a lot of time.

That's why chemists developed multiple formulas to help efficiently communicate these compounds and give insight into bond angles, the relative positioning of atoms and in some cases, to condense the structure by removing hydrogen. These different techniques will not only help you understand the chemical structure, but they'll also help you depict them in a variety of valuable ways!

In this article, we're going to break down the importance of structure and describe three of the most commonly used formulas: condensed, shorthand and Kekulé. Our goal is for you to walk away with the knowledge to understand, draw and write chemical structures on your own!

The Importance of Structure

In the same way that memorizing your multiplication tables was crucial for moving up in math, mastering chemical structure will help you advance in organic chemistry. Though it can be overwhelming at first, practicing drawing and writing organic molecules will familiarize you with the fundamental techniques and formulas you'll need to understand new concepts!

Learning chemical structure can be a lot like learning a language, which starts with an alphabet to form every word in the dictionary. You'll need to combine letters to form a word to demonstrate it accurately to communicate an idea. Even a small deviation can completely alter a word's meaning. Add an extra 't' and the conjunction 'but' turns into 'butt.' Then there's context and grammar. A missing comma takes, "Let's eat, Grandpa," to "Let's eat grandpa." Language requires you to pay attention to the details.

The same goes for organic chemistry too. Slight alterations to a molecule could transform it into something radically different. In the field, that could be the difference between morphine and heroin. Both have similar structures, but a beneficial medicine could turn into a dangerous drug with a simple adjustment. Structure communicates the properties and reactivity of compounds, making it vital for you to understand and communicate them well.

Structure is so crucial to drawing organic chemicals because most molecular formulas don't convey the individual possibility of every compound. When different compounds have the same molecular formula, we call them isomers. The pervasiveness of organic isomers reveals the exceptional number of ways that carbon can form strong bonds with itself and other compounds, which again reiterates the importance of understanding structure.

You should already be familiar with basic molecular structure from general chemistry. But as you venture into more complex organic compounds, you'll need more efficient ways to depict structure while maintaining structural accuracy. That's where the condensed, shorthand and Kekulé formulae come in. These "dialects" were designed to offer you different ways to draw or write a molecule while keeping it condensed and in some cases to highlight its prominent parts.

Making agile transitions between these formulas and understanding the meanings of each formula at a glance is a great strategy, but learning to visualize 3D molecules based on 2D drawings will take time. Model kits are an excellent tool for training your mind to match models to formulas.

Just remember that, like learning a language, fluency in organic chemistry comes from practice and repetition. As we walk through the formulas, be patient with yourself and cultivate a growth mindset as you set out to master these techniques.

Take a look at some of these examples:

IMAGE - RECREATE THE FIRST TWO AND LABEL THEM A, B. SKIP THE THIRD. ETHANOL IS USED IN THE NEXT SECTION

Kekulé formulas show all the bonds available in a compound structure, making it tedious to draw. The more complex the compound, the more expansive the formula will become. While it's useful to help us understand the bonds within the structure, it can make it difficult to rapidly decipher or communicate multiple forms.

Condensed formulas depict molecular compounds by stringing together their textual elemental symbols. The goal is to communicate the chemical structure in a line of text as opposed to a drawing. Condensed formulas typically leave out horizontal and vertical carbon bonds but indicate each individual structural unit with a subscript number that denotes its substituents, including hydrogen.

You write the order of atoms is like a structural formula, except that they are stuck to a single line. This saves room and makes it quicker and easier to write out.

Let's look at an example. Here's how you write ethanol in a Kekulé formula:

To begin condensing the compound, start by following the parent chain, the longest line of continuous carbon atoms. The rest of the atoms attached to this chain make up the substituents. In ethanol, two carbons make up the longest chain. As we begin to condense the structure, take a look at the left-most carbon.

Attached are three hydrogens, which we can indicate by using an H and the number 3 in the subscript (H3). Next, we have another carbon with two hydrogens attached. We'll write that as H2. Lastly, there is oxygen and additional hydrogen, which you can tack onto the end of the line as OH.

Now, let's put it together. Since the condensed formula doesn't show bonds, the substituents are inserted into the formula adjacent to the carbon they're attached to. So here's how you write ethanol in a condensed structural formula:

You may need to show how groups of atoms connect to a single atom in a compound for more complex compounds. To do that, you'll use parentheses around the elements to offset them from the parent carbon. Atom groups enclosed in parentheses are attached to the adjacent carbon atom.

Let's look at another example. This is what isopentane look like in its Kekulé formula:

Starting with our parent chain of carbon, we see that the left-most carbon has three hydrogens attached. Our next carbon is adjacent to this first CH3 group but has another CH3 group branching off of it as well and separate singular hydrogen. This is where parentheses come in handy. Since the second carbon has two CH3 bonded to it, instead of writing CH3CH3CH, we can condense it to (CH3)2CH.

Finishing up the rest of the chain, we can see another carbon with two hydrogens, followed by carbon with three hydrogens, which we can truncate to give us the following condensed structural formula:

Here's another example for using parentheses. Take a look at another Kekulé formula:

IMAGE - NOTE: THIS SHOULD BE RECREATED WITHOUT DOTS

Practice using this formula by condensing the Kekulé structures in the previous section. Check your answers at the end of this article. 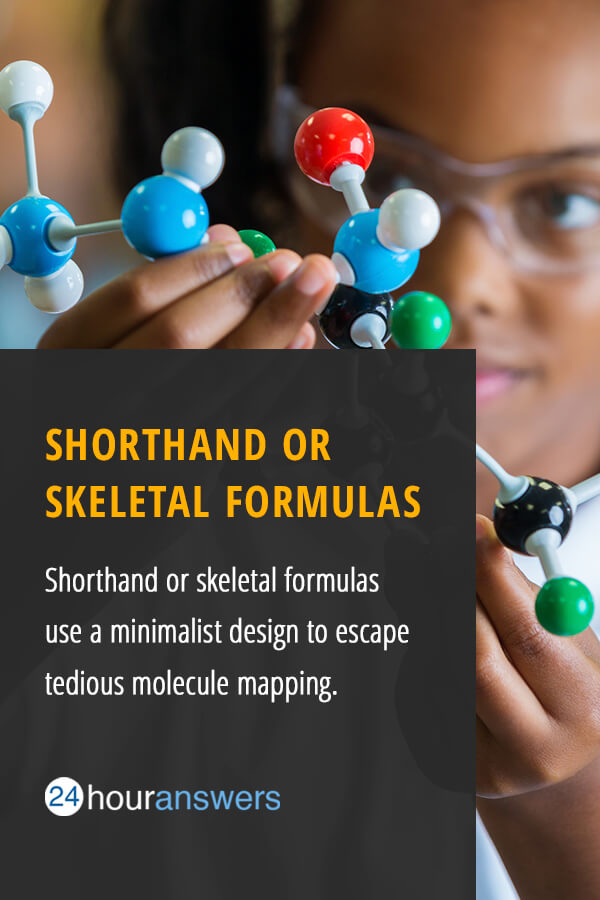 Shorthand or skeletal formulas use a minimalist design to escape tedious molecule mapping. They are condensed depictions of chemical structures that forgo carbon and hydrogen symbols to make them fast and easy to draw and read. Because molecules are typically made of stable bonds, these formulas end up looking like zig-zag lines. If you use your modeling kit, you'll find it isn't easy to make a stick straight molecule, which makes zig-zag molecules more approachable.

Let's take a look at the skeletal formula of ethanol:

IMAGE OF SKELETAL FORMULA OF ETHANOL:

To decode this image, you'll need to start with the lines. Each segment represents a carbon atom and connects carbon to carbon. The hydrogen atoms are implied and assume that there are enough hydrogen atoms to give each carbon four bonds. All other atoms and their hydrogen attachments are indicated by their elemental symbol attached to the corresponding carbon.

We do this to make it clear that lone pairs or hydrogens surround non-carbon atoms. Notice how you would draw the OH in this example next to the second carbon line, which is where it would be in the Kekulé and condensed formulas.

Let's look at another example, by taking our third condensed formula from the previous section [ClCH2CH2CH(OCH3)CH3] and looking at its shorthand form:

You write chlorine out in its elemental form and attach it to the first line, indicating the first parent carbon. Then we have a downward segment line followed by an upward line to indicate the next two-parent carbons. We create a straight line to the oxygen element from the third carbon, which has its own offshoot, a slanted line to indicate its own carbon bond. Moving back to the parent structure, we finish the formula off by one final line to represent the fourth carbon.

When we compare the condensed formula to the shorthand, we can see that the number of hydrogen attached to carbon does not have any bearing on the lines, which gives it its minimalist appearance.

To try drawing your own line angle structure, use some of the other examples from the previous sections. Here are some simple tips to help you:

Not sure if you're doing it right? Still have questions about the formulas or how to condense more complex compounds? That's okay. We want to help.

Take Your Learning to the Next Level With 24HourAnswers

Organic chemistry is a rigorous science and a rigorous course. While we love to advocate for practice and repetition, it's not the only coursework students need to balance in their schedules. The pressure to learn and apply things quickly sometimes makes it necessary to reach out for extra help. But what happens when good help is hard to find or can't meet with you on your tight schedule? That's where we come in.

At 24 Hour Answers, we offer live tutoring sessions and step-by-step solutions for your organic chemistry class and other challenging courses. Our instructors aren't students but credentialed, academic experts that are available to you 24/7. We know you can't always wait for the answer to your chemistry questions, especially when you're studying for the next day's midterm or doing late-night homework sessions.

Students are giving us rave reviews on Google, and they'll tell you how happy they are to have found us. Whether you need online tutoring, homework help, project assistance, or help with your labs, we have knowledgeable tutors ready to step in. We promise you complete privacy, secured transactions, quick responses and better grades!

To start, fill out the form on our front page with your questions, explanations, comments and relevant files.