How Hard is Organic Chemistry?

How Hard is Organic Chemistry?

While organic chemistry is a subject many students enjoy and find interesting, it has a reputation of being one of the hardest STEM subjects. It’s sometimes called the “pre-med killer” because it causes many students pursuing medical school to switch their major.

Though it takes up only six to 12 questions on the MCAT, organic chemistry, often called “orgo” or “ochem,” can cause many students to struggle and lose hope. Organic chemistry is a difficult subject because it needs a solid chemistry base and logical understanding, but it can be mastered.

The goal of organic chemistry is to understand the structure and reactivity of organic molecules. It’s a highly interdisciplinary science that uses both chemical and physical properties of matter to address questions in biology, materials science, and physics.

Organic chemistry can be summarized as the study of carbon-containing compounds in covalent bonding. It allows us to understand the properties and reactions of these compounds. Organic chemistry is used in a variety of real life applications such as the manufacture of rubber, fabrics, pharmaceuticals, and paper.

Organic synthesis is a branch of organic chemistry that involves producing chemical compounds from reactions between smaller molecules. This area of study is also used when observing biological processes and developing new drugs.

In addition, organic chemistry is used to develop and refine methods for analyzing natural products, food, and other substances.

Here, we’ll discuss how difficult organic chemistry is, as well as steps you can take to master this rich subject.

What Exactly Is Organic Chemistry?

In the 18th century, chemists divided their science into two branches:

It was discovered that organic compounds are made up of carbon and hydrogen atoms bonded together by covalent bonds. These bonds occur when electrons are shared between two atoms.

As a result, a major definition emerged from this era — that organic chemistry is a branch of chemistry that deals with carbon-containing compounds.

It was thought that organic compounds could only be derived from natural sources. This was erroneous. In 1823, German chemist Friedrich Wöhler obtained the natural compound urea from inorganic ammonium cyanate.

During the 19th century, structural theory emerged from the concept of isomerism in organic chemistry. In the late 19th and early 20th centuries, major discoveries pertaining to the behavior of atoms and electrons provided a physics basis for theories of molecular structure and bonding.

Here is a list of some common organic compounds based on their functional group (alkyl or aryl groups (any hydrocarbon chain, consisting only of carbon and hydrogen atoms, where one or more hydrogens are substituted with a functional group) are abbreviated with R):

Once organic compounds are classified, various organic reactions can be studied. Some of the basic reactions in organic chemistry are:

How Difficult Is Organic Chemistry?

During college, many students are swamped with assignments as well as studying for other courses and simply don’t have the time or energy to dedicate to mastering organic chemistry.

It requires an understanding of a variety of functional groups, reaction mechanisms, bonds, and polarity. While these can be mastered, there can be a steep learning curve.

Studying the various reactions and theory in organic chemistry requires rote learning and memorization. But true understanding goes deeper than that, making the course time-consuming and, for many students, intimidating.

There isn’t much math in organic chemistry, as the subject is largely conceptual. So, what makes organic chemistry so difficult? Simply that the subject requires the application of a variety of organic topics and a development of a student’s intuition and reasoning capabilities.

Theoretical aspects are an important part of organic chemistry. This is because organic reactions are very dependent on the stability of the molecules involved.

For example, the stability of a molecule depends on the bond angles and bond lengths of the molecule. Theoretical concepts are used to predict what will happen when molecules are combined.

Organic chemistry also relies heavily on visualizations and symbols. This layer of abstraction can be difficult for students without a strong base in chemistry. Additionally, it can be hard to distinguish reaction mechanisms.

Students must learn to swiftly visualize and draw the structure of an organic molecule from its formula. For instance, the below molecule is sodium-2,2,6,6-tetramethylheptane-3,5-dionate: 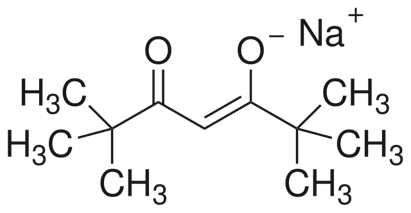 Organic chemistry is often regarded as the first difficult course that students will encounter where they cannot rely on memorization alone. It also follows a different approach compared to typical science courses.

To make matters more difficult, tests are often multiple choice, or fill-in-the-blank, and don’t leave room for guesswork or semi-correct answers, making it difficult to get partial credit.

For example, here’s a problem that could appear on an exam:

Which atoms in the below reaction would undergo oxidation state changes? Which of the atoms is oxidized and which one is reduced?

What Part of Organic Chemistry Is Most Difficult?

Since organic chemistry is based on chemical reactions, there is a strong emphasis on logic. When structural theory is fully understood, the reactions and molecules follow logically.

Students need to think carefully about how molecules behave and react based on the theories presented in lectures.

It is important to develop an understanding of how molecules can be written as symbols and drawn from their formulas. Students also need to learn how to write chemical formulas using the correct International Union of Pure and Applied Chemistry (IUPAC) conventions, or they may be penalized during an exam.

2. Plenty of Rules (Not Meant to Be Broken)

Organic reactions are not random. They follow rules, and those rules must be followed to ensure that the desired product is obtained.

However, organic reactions are still extremely complicated and students often struggle to figure out which rule applies to a particular reaction. This is because the rules are often implicit and only visible through careful observation.

For example, there are typically four rules governing when resonance can be considered in organic chemistry. A couple of the rules are:

In total, there are eight rules to consider when deciding:

This is just an example of the many rules that students need to learn how to apply, and why they exist.

The language used in organic chemistry is very different from other sciences. Before they really start studying, students need to have a basic understanding of terms like “electron donating” and “electron withdrawing” in order to understand the structure and reactivity of molecules.

Here are some common sample definitions of terms in organic chemistry:

What Aspects of Organic Chemistry Are Easy?

While organic chemistry is challenging for many students, some aspects of this subject are simple.

Here are some of the simplest parts of organic chemistry.

Organic chemistry is more about chemical principles and logic than it is about math. Organic reactions are straightforward when theories are understood and involve a series of logical steps.

Math is often a subject where science and pre-med students struggle. Math deals with abstract concepts and is represented by symbols, which makes it harder for some students to grasp. Thankfully, in most cases, organic chemistry does not require any math beyond basic arithmetic.

Rules in organic chemistry are often related to each other as well. Once the patterns are recognized it becomes easier to remember all the rules.

3. A Strong Chemistry Base Makes It Simpler

How Much Time Is Needed to Master Organic Chemistry?

There are different levels of organic chemistry. It is taught in high schools, colleges, and universities. For higher education students, dedicating six to eight hours per week can help.

However, time spent studying incorrectly will be of little benefit to students. To learn organic chemistry, continuously do exercises and solve practice exam questions.

The reason that the failure rate is so high in organic chemistry is that people underestimate the amount of effort and time needed to master the subject. In addition, students do not seek proper guidance or adequate explanations of difficult concepts.

Don’t be shy to ask for help when you need it. Ask a professor or organic chemistry tutor to go over difficult concepts with you to increase your understanding.

What’s the Best Way to Prepare for Organic Chemistry?

Consistent and continuous effort is crucial to mastering any subject. Students can also benefit from learning from a variety of sources, but keep in mind that your professor might have slight variances in notation and preferred methods that differ from those sources.

When studying organic chemistry online, keep in mind differences in the nomenclature in different regions and areas of organic chemistry. Studying the recommended textbook from your professor can be a more straightforward approach.

It is important to know alternate common names as your professor might use them interchangeably.

The best way to prepare for organic chemistry is by using practice sheets. Practicing organic chem is different from general chemistry courses and other science courses.

It is a good idea to review all of the practice problems provided in class to be prepared for final exams. Make sure you understand the different questions and what they mean.

If you get stuck, first review the question and then the answer provided. If you still cannot understand how to calculate the answer, check your textbook or the lecture notes. If you still don’t know, contact your professor.

To study organic chemistry, you can also practice sample problems in the recommended textbook. You can also use online resources to review practice sheets and practice tests, but these won’t necessarily align with question styles that your professor prefers.

The internet is a goldmine when it comes to learning organic chemistry. However, be aware that the resources are not always reliable, and they may not contain all the information your professor requires.

YouTube is one of the best sources of learning a variety of subjects and there are plenty of channels teaching organic chemistry.

Tutors are a great resource for learning organic chemistry and other subjects. They can help you understand difficult concepts one-on-one and offer advice when you get stuck.

They can help you prepare for exams and assignments and offer specialized guidance according to your areas of weakness. Often, online tutors have experience as teaching assistants in organic chemistry classes and possess insider knowledge about what is needed during an exam.

Online tutors aren’t necessarily restricted by office hours, and they are conveniently available to you from anywhere, as long as you have an internet connection.

You Can Do This

The difficulty of organic chemistry depends on your approach. It can be made easier with consistency, time, and hard work — and a little online help. It may be one of the most difficult STEM subjects, but if you’re well prepared, study effectively, and seek help when you need it, you can master organic chemistry.