Urdu is a language often confused with Hindi. This is an easy mistake to make, given that they sound almost identical when spoken, and that Hindi is the fourth most spoken language in the world.

Today, Urdu is the national language of Pakistan. 40 million Pakistanis residing in the country speak Urdu as their mother tongue. In addition, there are many more Urdu speakers abroad - almost 100 million of them - all over the world. India, for example, has more Urdu speakers than has Pakistan. This is because the origins of the Urdu language pre-date the 69 years Pakistan has been on the map.

Urdu is a delicate and sophisticated language spoken in multiple layers of complexity. There is modern Urdu which is the language most people communicate in. Then there is the poetic and sophisticated written Urdu which intellectuals are fond of using.  Given the three hundred years of colonial English rule, however, much of modern day Urdu vocabulary consists simply of English words written in Urdu script. Some examples include: سائنس(science), گلاس (glass) and جیل (jail). The good news is that pronouncing these words is easy because the pronunciation is exactly the same as it is in English. The modern Urdu alphabet has been modified and developed to phonetically mirror English as much as possible; thus there are letters for sounds such as ‘p’ (پ) which does not traditionally exist in the Arabic script from which Urdu is derived. The closest sound in Arabic to ‘p’ is ‘b’ (ب). Hence the famous ‘parking’ and ‘barking’ confusions when Arab speakers speak English.

The borrowing of words occurs both ways when it comes to Urdu and English. There are many ‘English’ words which actually originate from Urdu, and are thus the same. This isn't limited to the menu at a typical Indian restaurant, with words like ‘naan’ ناان or ‘curry’ کڑیی. It includes words like ‘verandah’ برآمدہ ‘jungle’ جنگل and ‘cummerbund’کمر بند.

Urdu came about as a mélange of the languages spoken in and around Delhi and Lucknow in the 12th Century, which were then the centers of the Mughal Empire. It is an amalgamation of Arabic, Persian (Farsi), Hindi and Turkish. The melting pot that was the Mughal Empire relied on Urdu as its official court language, as well as the language of its army barracks. Thus Urdu has always had an elitist and refined ring to it, and has been the language of the upper classes of Indian society for centuries. Indeed, many of the sub-continent's best poets, from Ghalib to Alama Iqbal, have written their most acclaimed works in Urdu, even though they are not native speakers of the language. Thus the golden period of Urdu poetry is between the 18th and 19th centuries. The first recorded verse of the language, however, was in the 1400s. For that reason alone, Urdu is a rich and highly rewarding language to study, as it allows access to some of the most sophisticated and poetic texts and philosophical outputs of this region of the world.

Unlike its ‘sister’ language - Hindi, Urdu is written in the Nastaliq script style of Persian. Like Arabic and Persian, Urdu reads right to left, whereas Hindi reads left to right. This is why an Urdu speaker may be able to understand Hindi when it is spoken, given it is so similar in grammar and vocabulary to Urdu. Yet given that Hindi is written in ‘Devanagri’, the same script as Sanskrit, Hindi as it is written is indecipherable to an Urdu speaker.

In modern times, Urdu has mainly been connected with the Muslims of the Indian subcontinent, due to the formation of the Islamic State of Pakistan taking it as its national language. Many texts critical to modern Islamic political and theological output by writers such as Hamidudeen Farahi and Amin Islahi have been penned in Urdu. Now, thanks to migration, Urdu is spoken in many countries around the world, including Britain, Canada, the USA and the Middle East.

Urdu is a very formal and polite language. As with French and Arabic, it can be confusing to master all the formal and informal verbs, as well as the gender inflections. تو، تم and آپ for example, are all used to address someone (you), but can be easily offensive if used in the wrong context. The same is the case for verbs such as جا (extremely informal or rude ‘go’)  جاو (informal or casual ‘go’) and جاءیے (polite and respectful ‘please go’). There are also irregular spellings, as there are in English, where a word is spelled one way and pronounced another. بالکل (absolutely) for example, is written ‘bal kul’ but pronounced ‘bil kul’. Practice with a fluent Urdu-speaking partner should remedy these few pronunciation oddities. As with Mandarin, there are also slight subtleties in pronunciation that could render the word a completely different meaning. کہنا (to eat)  کھانا (to say) and کرنا (to do) can be easily confused. 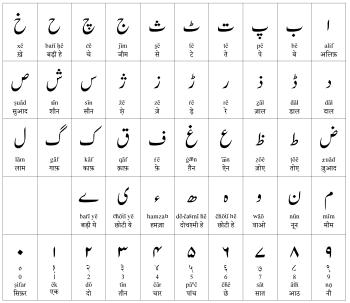 To fulfill our tutoring mission of online education, our college homework help and online tutoring centers are standing by 24/7, ready to assist college students who need homework help with all aspects of Urdu. Our languages tutors can help with all your projects, large or small, and we challenge you to find better online Urdu tutoring anywhere.